We began our day with another ride on the Canada Line. We went to Canada Place to catch the free shuttle to Grouse Mountain.

The gondola ride up was beautiful, we were very thankful that the smoke is breaking. The gondola is the largest aerial tramway system in North America.

Once on the top of Grouse we participated in a guided eco walk. We learned about more about the mountain top flora and First Nation history and culture in British Columbia. 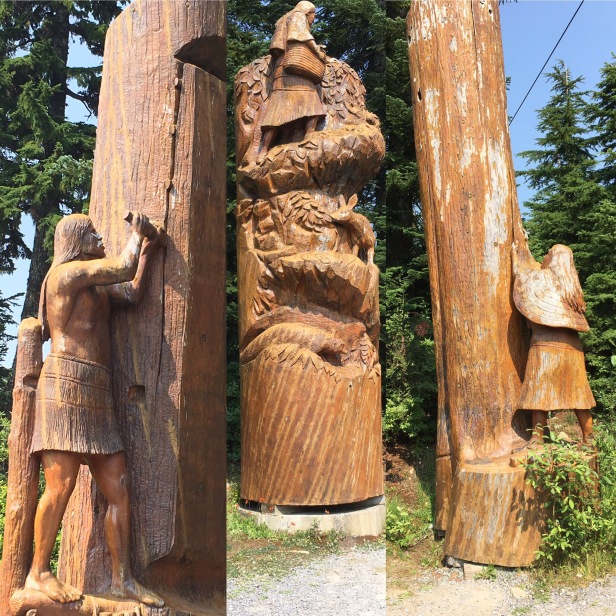 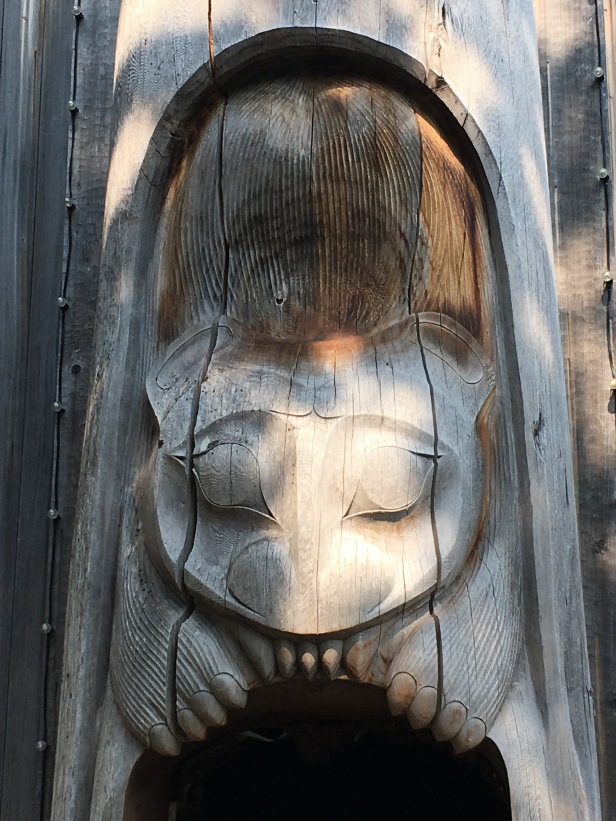 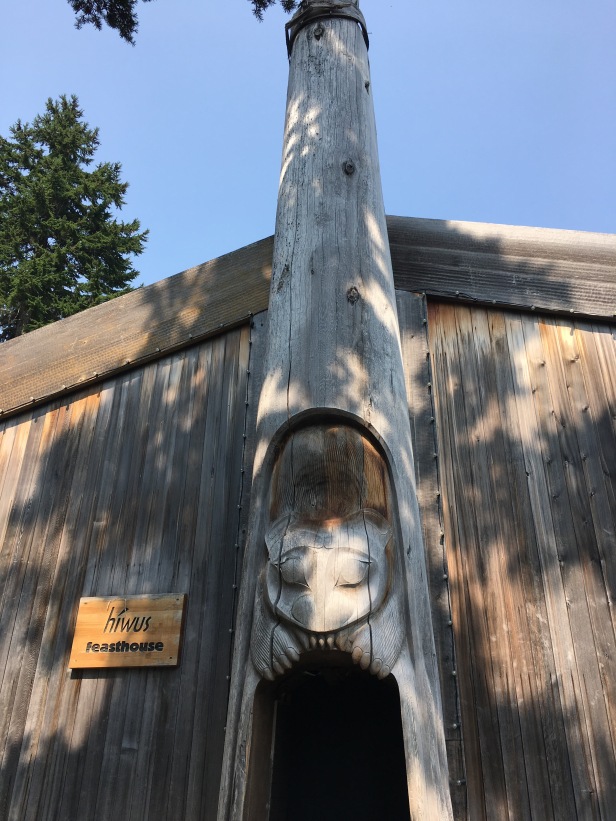 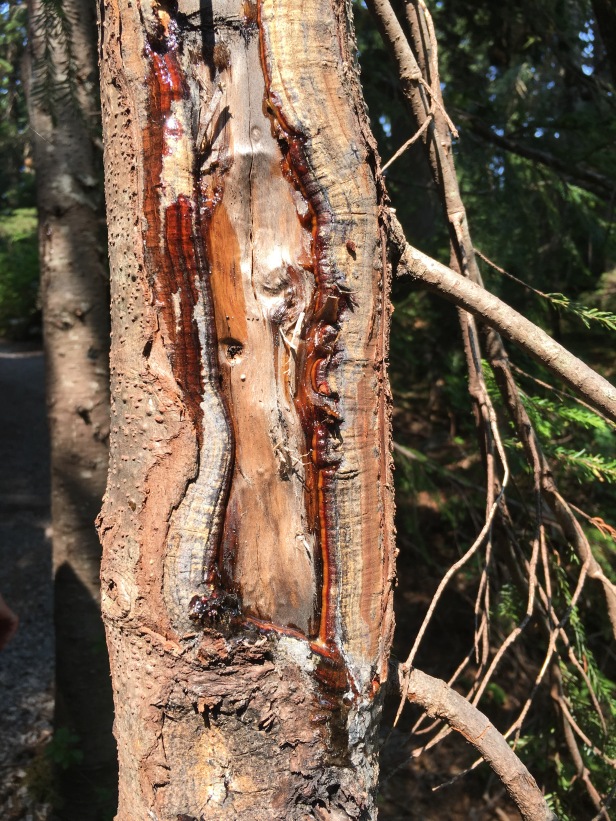 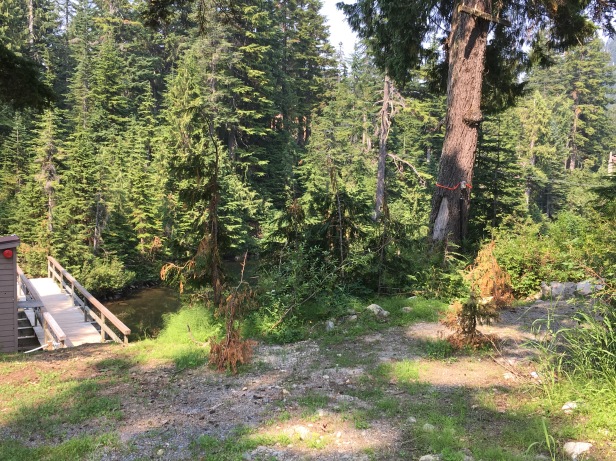 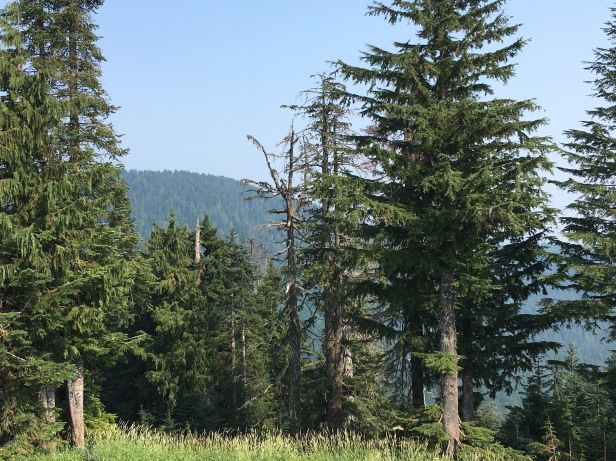 We stopped and watched Grinder and Coola, orphaned grizzly bears that live in a 5 acre sanctuary. These bears having been living in this sanctuary since 2001. 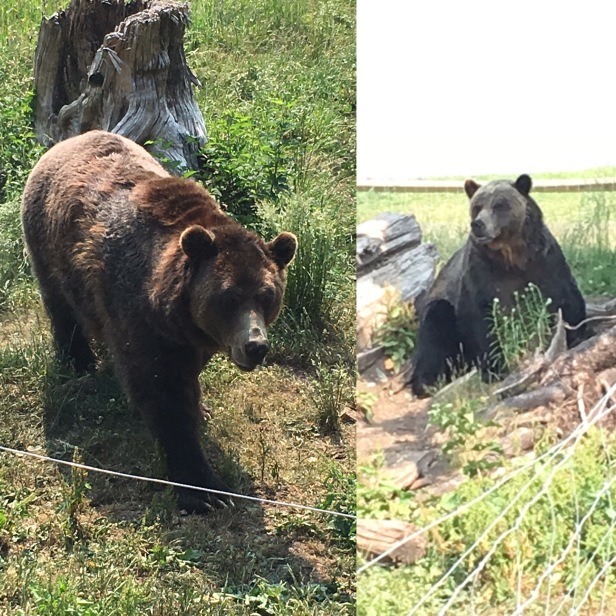 Then we walked to the birds in motion demonstration. We arrived in time to see the peregrine falcon fly over the crowd and then into the trees. We also saw the barn owl fly over everyone’s head. Unbelievable how quiet and large these birds are!

We had lunch on top of Grouse at Rusty Rail BBQ. View was amazing! Delicious food! Fantastic local craft beer. 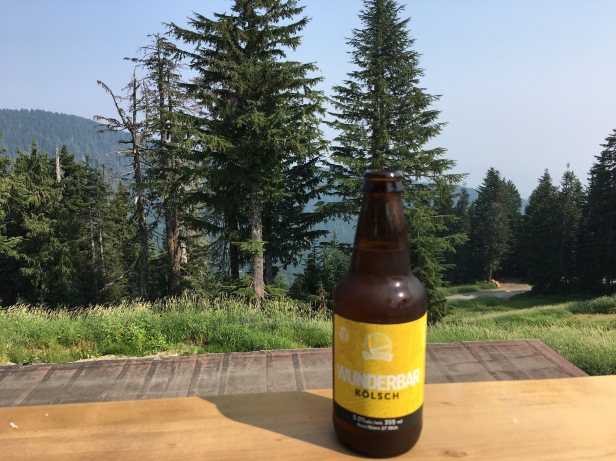 We thoroughly enjoyed the first half of our day at Grouse Mountain.

Time to take the city bus to Capilano Suspension Bridge Park. As you enter the park there is information about local First Nations Peoples and Chief Joe Capilano. Chief Joe Capilano became Chief of the Squamish in the late 19th century. He travelled to Vancouver Island and the coat to talk to other First Nations to talk about the important of Native rights. He led a delegation to London to meet King Edward VII in 1906 to discuss issues and rights. 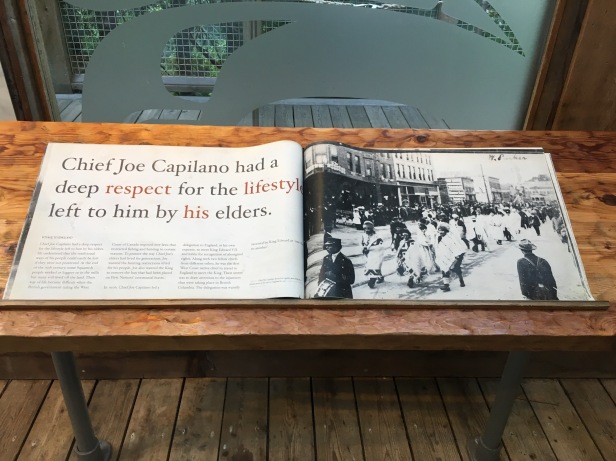 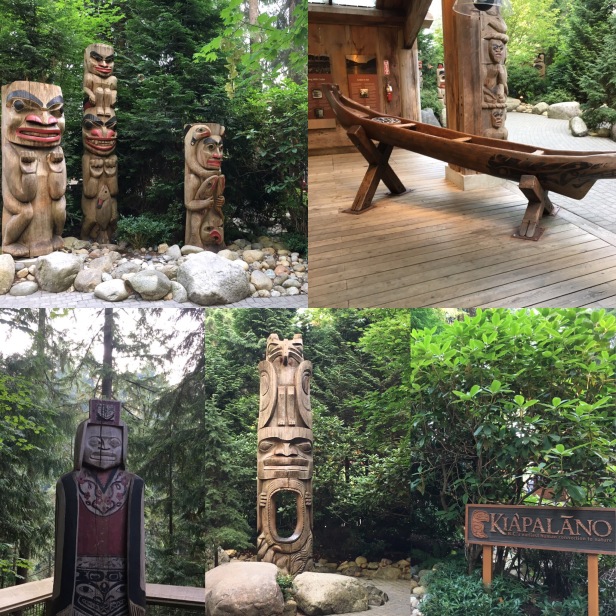 We began with the cliffwalk. The walk goes out beyond the cliff face and above the Capilano River Canyon. This was awesome!! 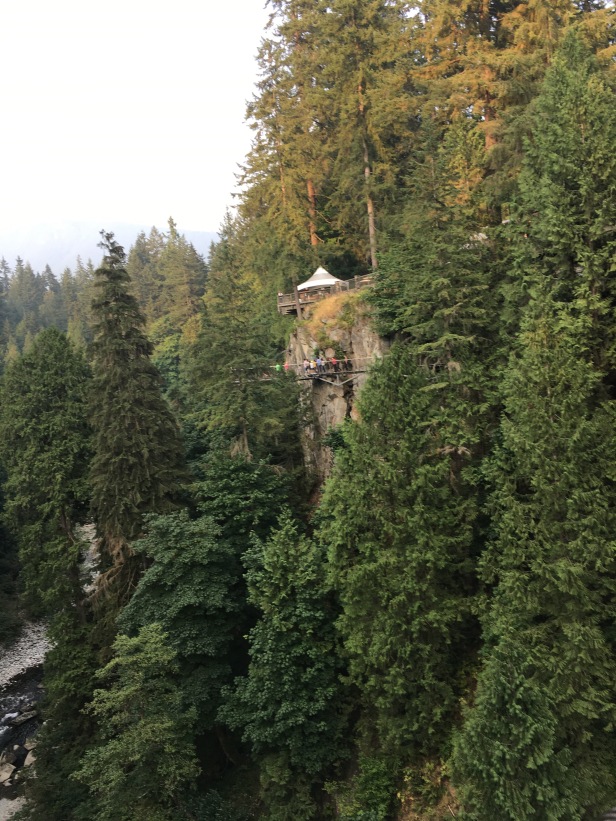 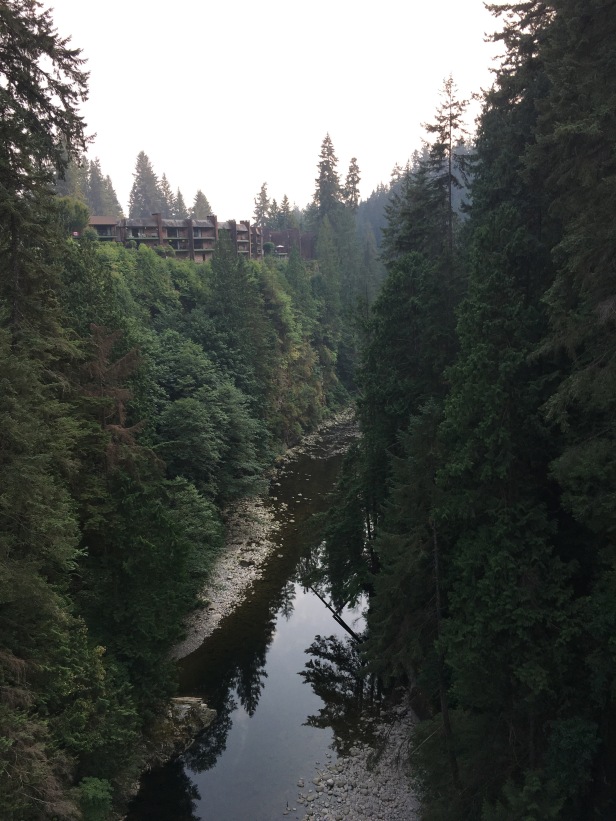 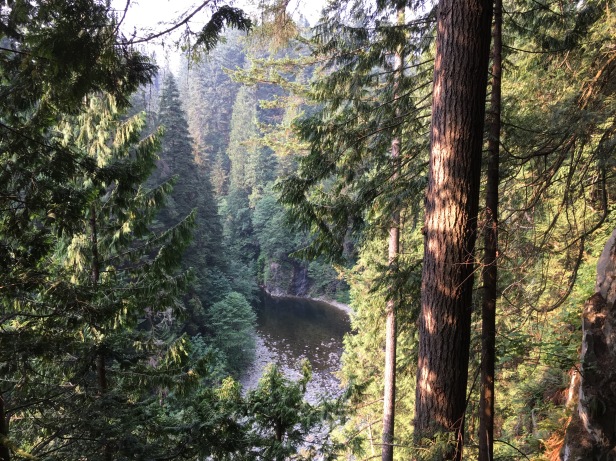 Then time to walk across the Capilano Suspension Bridge. It was built in 1889. The Bridge is 450 foot long and 230 feet high.  Today the Bridge did have quite the swing to it. There were some children who wanted off but had insisting parents pulling them across the bridge. 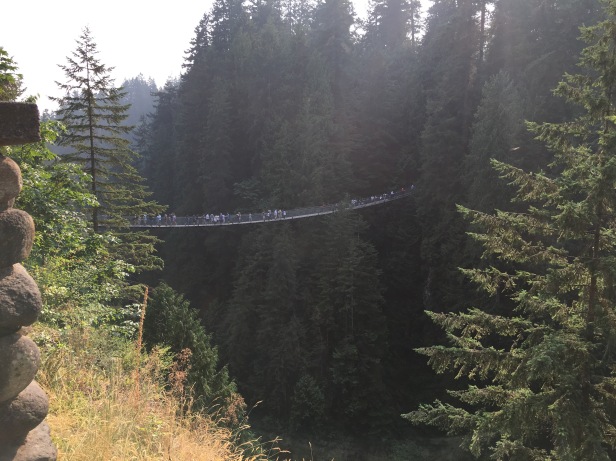 As we were walking to do the Nature’s Edge trails we stop for a few minutes at Raptors Ridge and saw a great horned owl. The Nature’s Edge walk goes throughout the rainforest and has many views of the Capilano River. 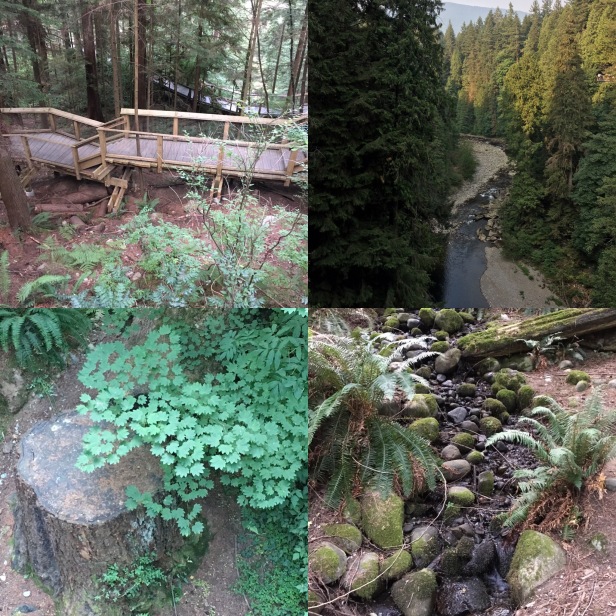 Now it was time to go up! We did the tree top adventure. 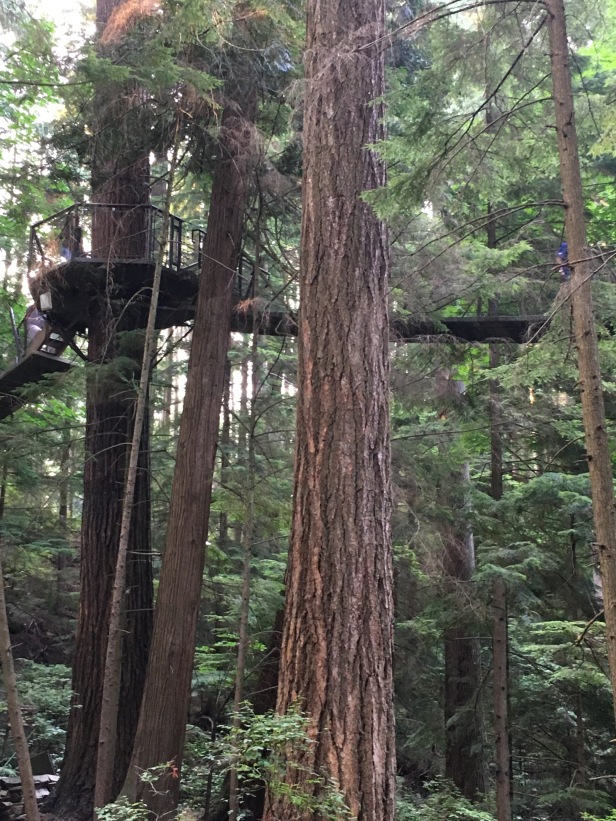 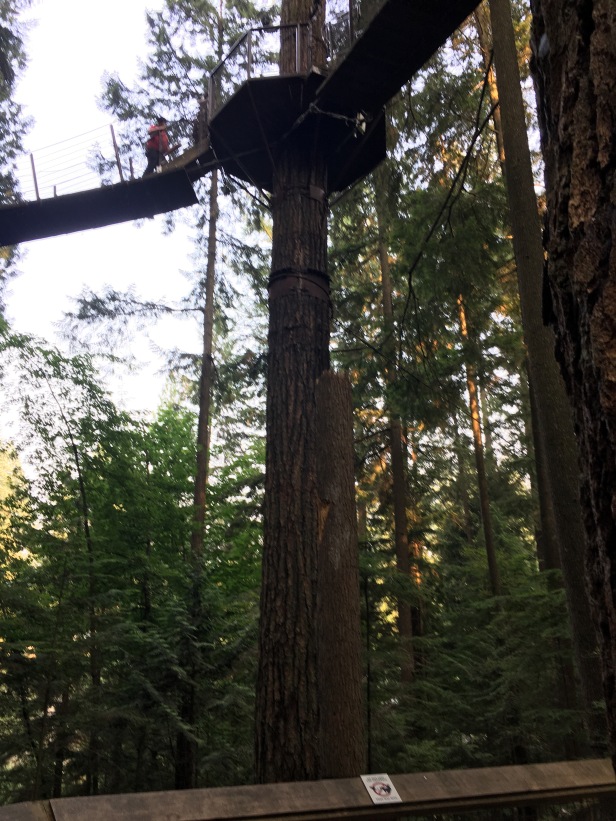 This walk goes on seven suspension bridges through the old growth of Douglas fir trees. 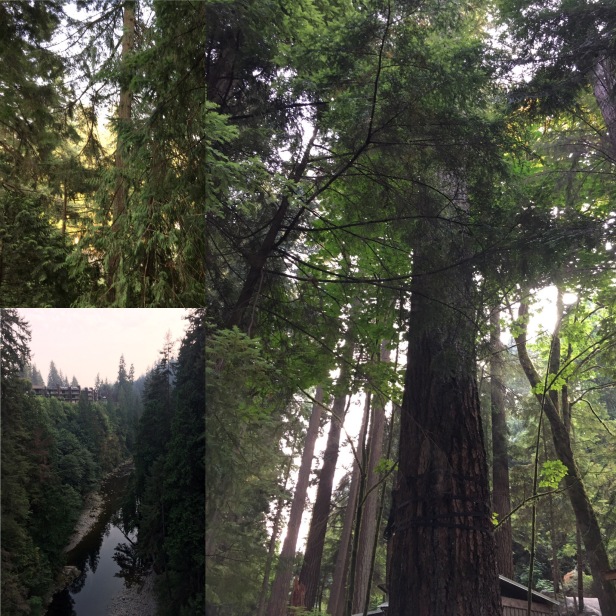 The suspension bridges are mounted around the trees so it does not harm the trees. 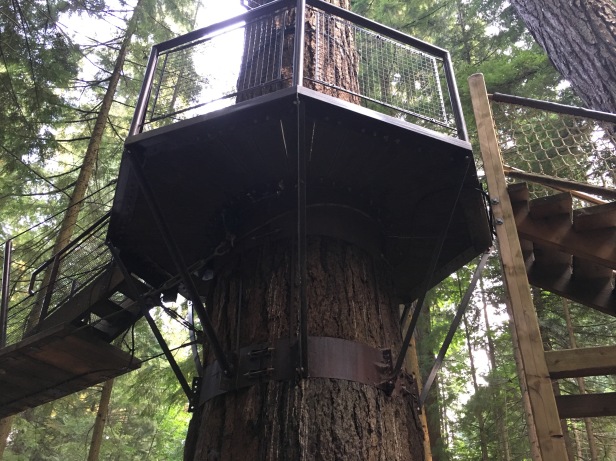 Magnificent views and another breathtaking experience!

We took the free shuttle back to Canada Place and went to Steamworks Brewing Company for dinner and drinks.

I have childhood memories of both Grouse & Capilano but both have expanded and become even more beautiful than I remember. British Columbia lives up to its motto Beautiful British Columbia!