Today the five us have set out to spend the day exploring the Quoddy Loop. The Quoddy Loop is an international loop that consists of island and coastal communities along and within the western Bay of Fundy and Fundy’s numerous bays in Charlotte County, New Brunswick, Canada, and Washington County, Maine, U.S.A. — the greater Passamaquoddy Bay area. Ben has done the research for us and decided based on tides it is our best interest to do this loop in the reverse order.

Our first stop was Robbinston Maine. At the lookout point you can see the Huntsmen Marine Science Centre in Canada. 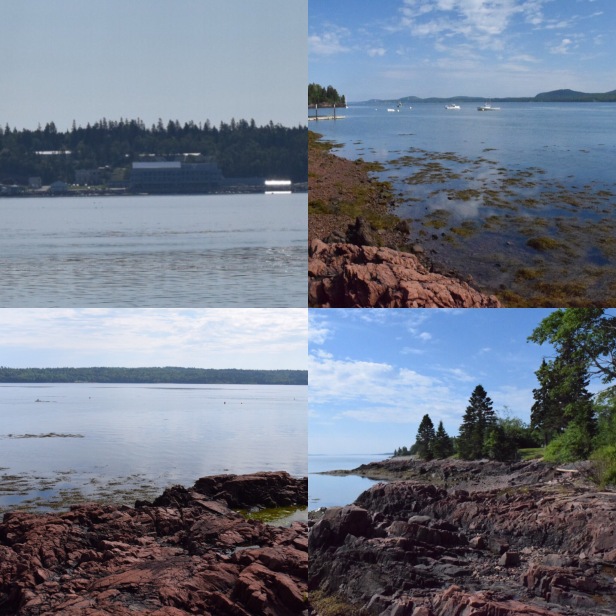 Our next stop was Eastport Maine the home of Raye’s Mustard which was founded in 1900 by J. Wesley Raye. He started this business in the family smokehouse to produce mustard for Maine’s burgeoning sardine industry. It has been passed down for four generations and continues to be family operated. We did some sampling and buying – had to go with Down East Schooner, Lemon Pepper and Garlic Honey Wine. 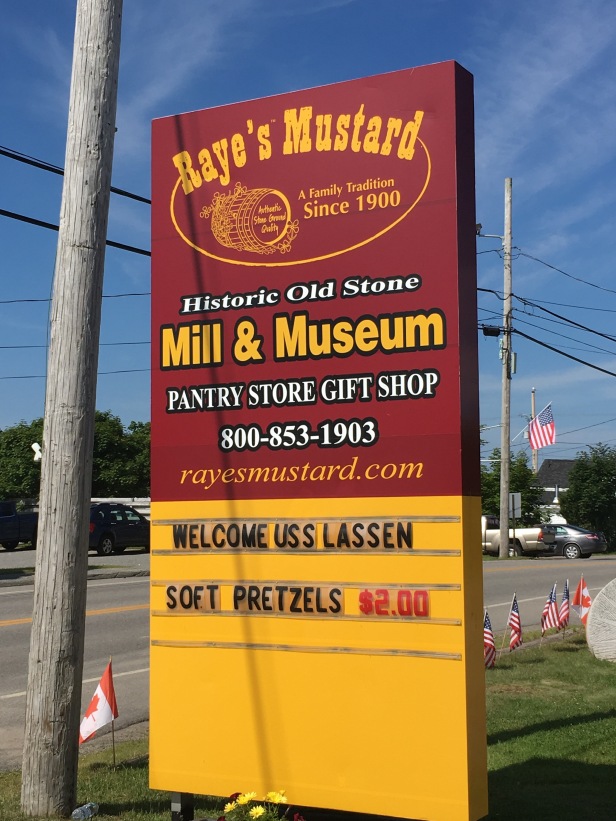 We continued on to the down town core of Eastport. The USS Lassen navy ship was docked here. Unbelievable how massive it was, made the fishing boats seem tiny. 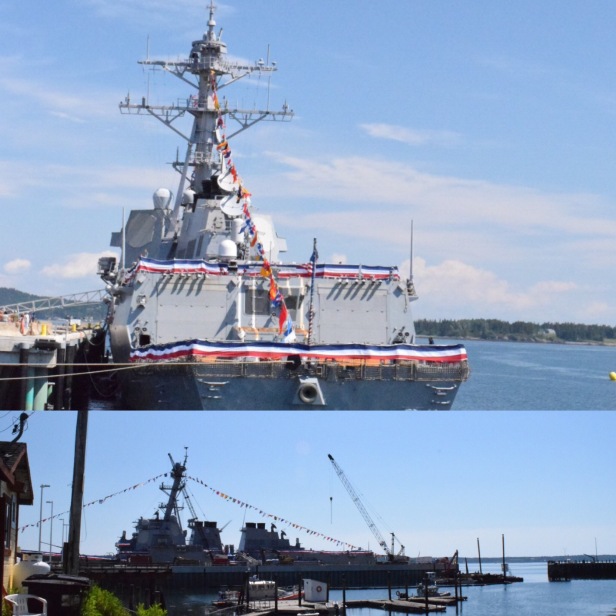 The town was festively decorated for the 4th of July, including an inflatable Uncle Sam. We had to stop in at the Moose Island Bakery, not just because of it’s waterfront view but it has the most amazingly decorated cupcakes I have every seen. Had to try the hamburger cupcake – as I would have guessed it was delicious.


Lubec Maine was our next stop. It is the most eastern place in the United States of America. 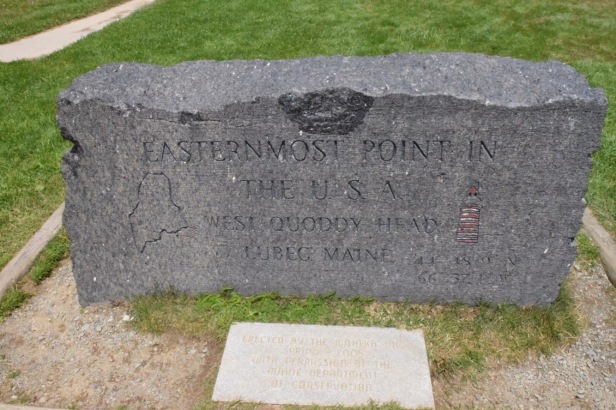 Monica’s chocolates was a mandatory stop, one it’s chocolate, two it has quite the reputation for being fabulous, and lastly Monica is my Grandma’s name. The raspberry truffles and chocolate covered marshmallows were definitely worth the trip. 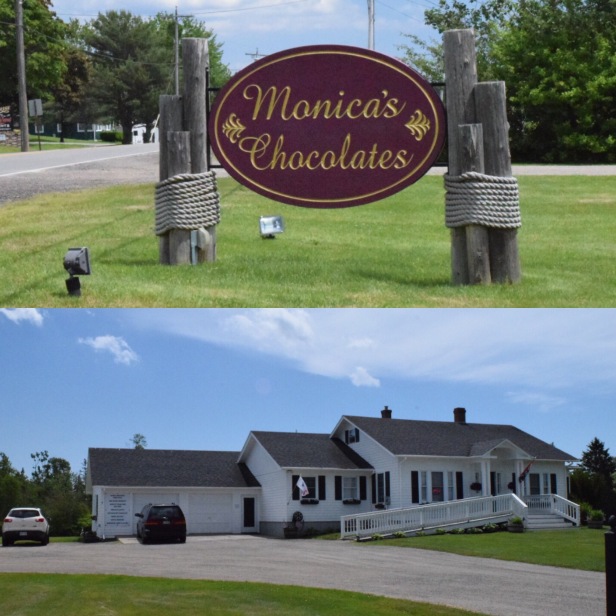 Our next stop was the West Quoddy Head Lighthouse in Lubec Maine. This charming lighthouse is the only “candy striped” tower in the USA.  West Quoddy Head Lighthouse was originally built in 1808 under orders from President Thomas Jefferson.  The lighthouse tower that stands today was built in 1858, the light was fully automated in 1988 and flashes in a pattern 24 hours a day. 2 seconds on, 2 off, 2 on, 9 seconds off. The visitor’s center was actually home for several generations of lightkeepers and their families. 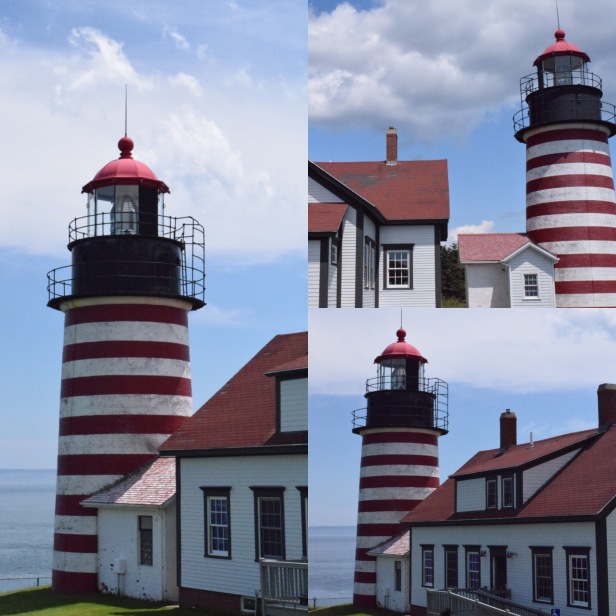 Roosevelt Campobello International Park was our next destination. This is a very intersting island: it’s beautiful, was Franklin D. Roosevelt’s summer home and it’s location – off the Coast of Maine but located in New Brunswick on the Bay of Fundy. President Johnson and Prime Minister Pearson created the Roosevelt Campobello International Park in 1964. It is Canadian soil that has become part of American history. FDR’s parents James and Sara first visited Campobello Island in 1883 and purchased a partially completed house and some land. By the summer of 1885, the Roosevelts had become summer residents. FDR spent most of his summers from when he was one year old to 1921 when he was stricken with polio. FDR’s children generally had lessons in the morning and the afternoons playing around outside, FDR spent time with his children and working on his stamp collection, Eleanor knitted, wrote letters and read. I can only imagine how delightful it must have been to sit on the porch, enjoy the view and read a good book. The Roosevelt cottage is preserved with original items such as furniture, quilts and dish ware. 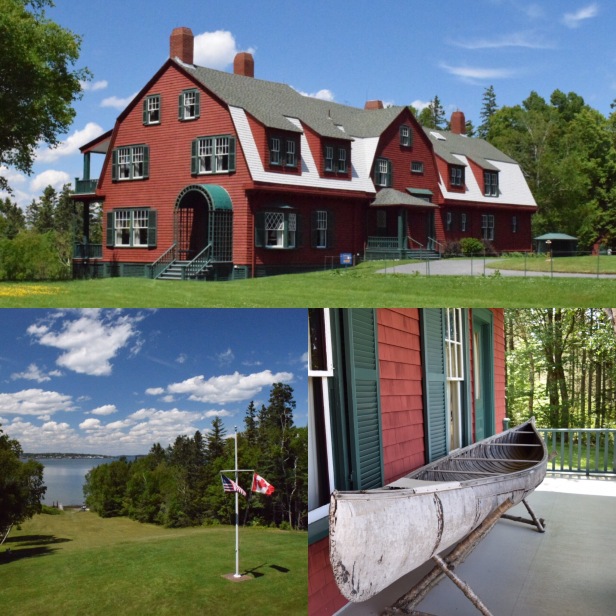 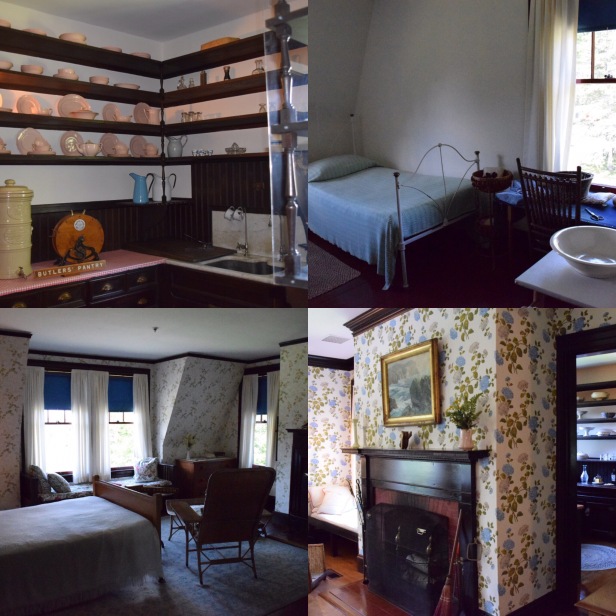 In the late 1880’s other wealthy American families invested in Campobello property and built summer homes. Today, four of these cottages are owned by the Park Commission. I would recommend a visit to Hubbard Cottage. I absolutely loved the oval window. 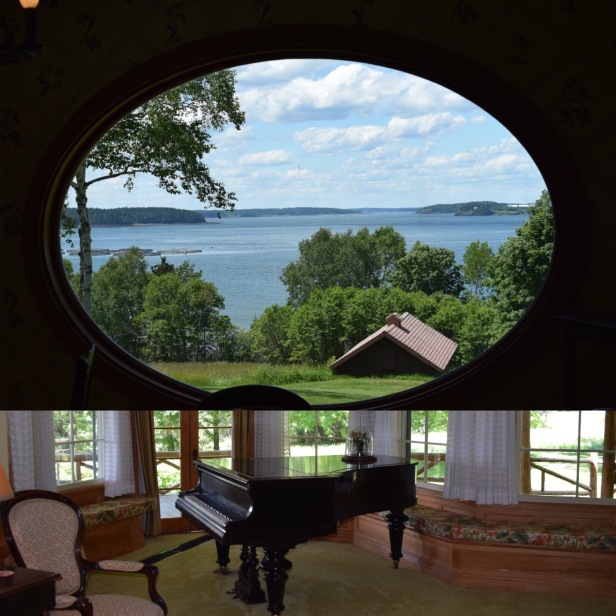 If you have the opportunity Campobello Island is a must see, it’s a wonderful mix of history, a symbol of close US-Canadian relationship and has picturesque views.

Our next stop was Head Harbour Lighthouse. It is the second-oldest lighthouse in New Brunswick built in 1829. Head Harbour Light is designated as a Classified Heritage Site. The lighthouse is only accessible by foot, so you have to make sure you visit at low tide. Due to our timing, we decided not to have a rush trip but to admire from afar. 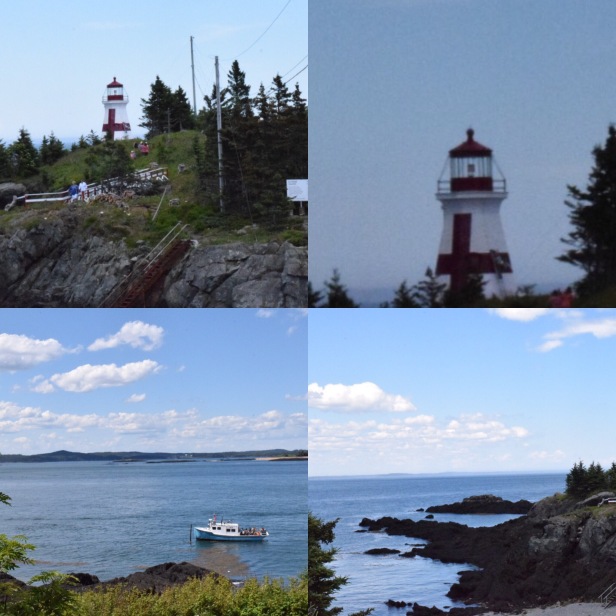 While we have seen a lot today, our day is not over. We took the ferry to Deer Island. Deer Island is located in the Bay of Fundy at the entrance to Passamaquoddy Bay. It is exactly half-way between the Equator and North Pole. Our first stop was the 45th Parallel Restaurant where we enjoyed delicious lunch of fish and chips and lobster rolls.

On full stomaches we continued to Deer Island Point Park to see Old Sow Whirlpool. The Bay of Fundy’s currents swirl in great circles between Deer Island Point and Eastport, Maine creating one of the most dramatic demonstrations of the power of the tides. “Old Sow” is the largest whirlpool in the western hemisphere, the second largest in the world. 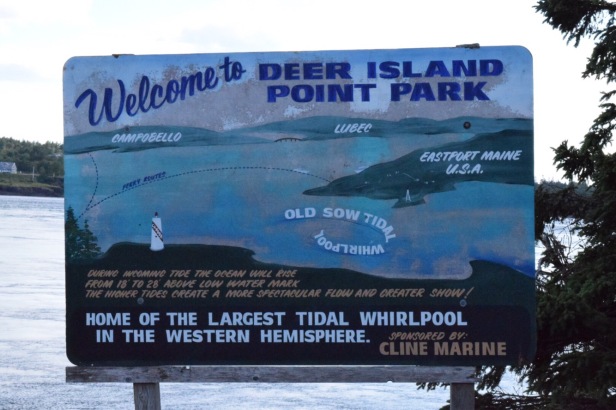 Old Sow is best witnessed three hours before high tide. We have planned our sightseeing today to be here at the best time. Not only did we see Old Sow, we also had the pleasure of watching frolicking seals and porpoises! 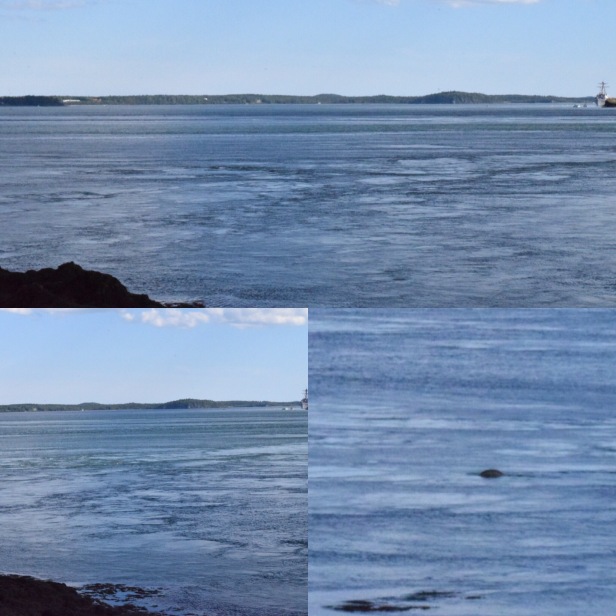 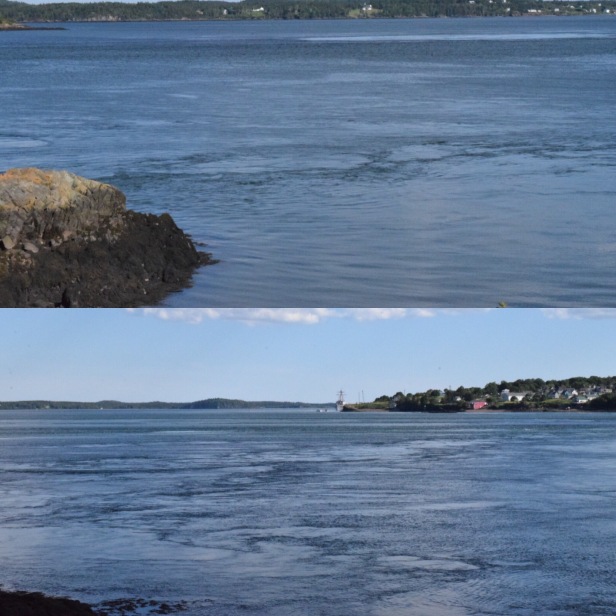 We took the ferry back to mainland New Brunswick and drove to St. Andrews. We ended our day with a wonderful night at Red Herring Pub, where we met up with some of Ben and Ellen’s friends. Cheers to another fantastic day!